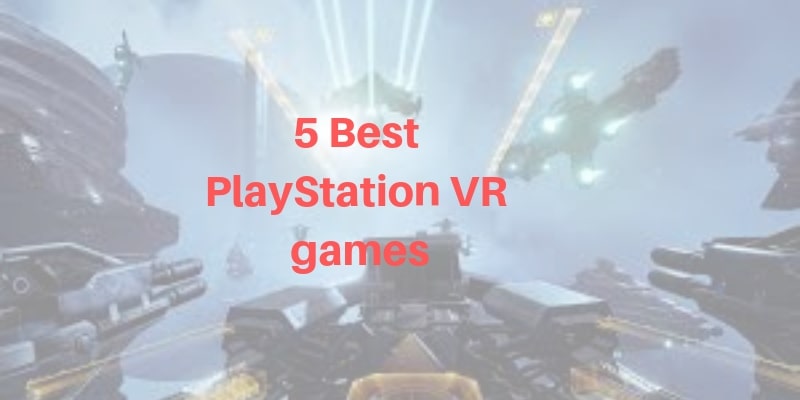 PlayStation VR is Sony’s attempt to bring virtual reality to our homes. Regardless of the PS4 you have, everything seems to indicate that the new PSVR is going to become the most successful virtual reality device on the market. However, it does not matter how good the PlayStation VR can be if there are no quality video games to enjoy with it.

CCP Games puts us in the complex universe of EVE Online as never before, in one of the best games of the PlayStation VR at this time. Participate in aerial combat in outer space and perform exciting tactical raids.

Do you like giant robots that fight each other? If not, not only will we not be friends, but you will lose a game that will give a lot to talk about. Located in the near future, RIGS welcomes elements of different sports fields, such as combat sports, motor and basketball, and mixes them in an explosive cocktail.

The heart of the game are the RIGS, fast, large and armed sports machines that you will pilot to compete for glory. As a pilot of one of these advanced machines, you will compete in a fascinating individual experience that will take your skills to the limit. Prove what you are worth in the tests to win the right to fight for the title in career mode, or improve your team’s tactics in impressive multiplayer games in four incredible arenas of the world while you compete with people from all over the sport of the future.

3) Until Dawn: Rush of Blood

From the twisted minds of the creators of the horror classic for PlayStation Until Dawn arrives Until Dawn: Rush of Blood. An experience that will make the creeps of all arcade shooter fans. Arm yourself to the teeth and fight your way through a horde of enemies and monsters that will launch for you from either side. Crouch and dodge everything that is thrown at you on this roller coaster ride full of scares.

Will you survive seven levels of pure terror to be among the top of the world rankings? With several different routes and nightmare themes that will make your hair stand on end, no trip will be the same.

One of the most cached titles of this first batch is Job Simulator, by Owlchemy Labs. In this simple proposal all the weight of entertainment falls on the physical, and how are the way to have fun doing all those tasks in the real world that are, by definition, boring. Job Simulator explores how to move anything to the digital dimension to make it fun.

If you plan to make the disbursement required by Virtual Reality, then put Job Simulator in your list of games to try because it is one of the most precise and concrete ways to understand this technology and the degree of immersion it pursues.

Here they Lie is a psychological horror game set inside a city in black and white, full of unimaginable horrors lurking on every corner, out of sight, tormenting and corrupting your mind.

There are not many horror games on PlayStation VR yet, so this is a great example of what’s to come and how spooky this genre is.

VR will Revolutionise the way we buy our future homes

What is a Signal Booster? Benefits & How to Choose the Best...