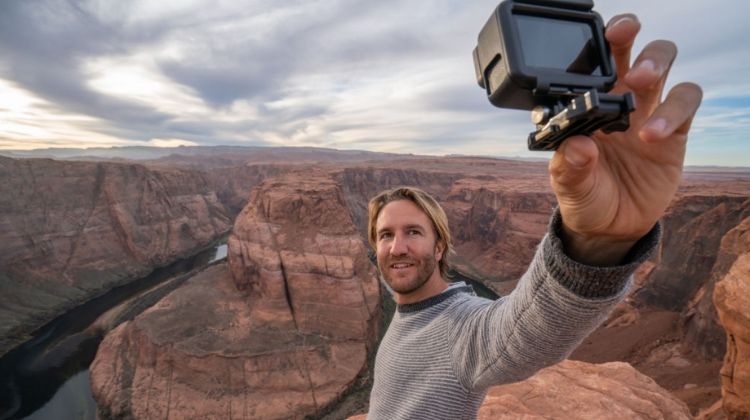 So here’s the question, are action camera’s a good choice for vlogging? Well, that depends heavily on what your subject matter is. Action camera’s, despite the dramatic name, are fairly straight forward. An action camera comes with a large assortment of features and attachments that make it more mobile and adaptable.

This means you can take it many different places and take pictures or record video while keeping your hands free.

For the uninitiated, vlogging is short for video blogging. When most people think of video blogging, they probably imagine a YouTuber making videos at home while sitting in front of their webcam. If this is your intended style of shooting then no, an action camera is probably not a good fit for you.

The various external attachments on action cameras are designed to help maintain grip when doing physical activity or using your hands for something. In the case of a traditional vlog, where you remain static and talk into your camera, these types of additions are largely useless. You’d be better served spending the money on a decent tripod to provide stability or more professional lighting set-up.

However, many vloggers produce less conventional content on a wide variety of specialized subjects. For example, many action cameras are designed so they can be attached to bike helmets.

If you plan to regularly show off your mountain biking skills on your vlog then a sturdy but cheap action camera is perfectly suited to your needs. The specifics vary based on the exact model, but most action cameras have upgrades that let them easily attach to helmets or headpieces, handlebars, and windscreens(?).

Action cameras also have wider lenses, giving them a broader view. This is ideal for outdoor shooting, capturing more of the surrounding environment. It is helpful for recording while physically active, increasing the field of view so any action you take is likely to be captured.

It also reduces the chance that you will exit the frame while the camera is being bounced or jostled. They also have remote controls, which allow you to make precise adjustments without having to physically reach out and touch the camera.

It’s great if you’re doing something physically involved or something that requires your full attention. Obviously, you don’t want to stop and get off your bike if you’re recording yourself while riding. However, you also don’t want to take your hands off the bars and risk crashing into something.

It’s also a big advantage if your camera has a cover blocking access to the controls, such as when you’re filming underwater with a waterproof case. That’s right, action cameras can film underwater. The waterproof case is a clear plastic cover which seals over the camera but leaves the lens exposed, allowing the camera to shoot underwater without being damaged. They are also designed to be shock-resistant, protecting the device if dropped or struck.

Zoom is another potentially useful feature. Zoom basically refers to how far away you can be from a subject and still get a clear picture or recording. It is pretty much useless for home vlogging or capturing images of yourself. However, based on the subject matter of your blog it can be very helpful.

For example, if you’re planning to create a travel vlog a good zoom function could be very useful for capturing landscapes, vistas, or distant buildings. It is also crucial if you’re filming animals or wildlife. After all, getting too close risks scaring the subject and having them either bolt out of frame or come charging at you.

Exact zoom strength depends heavily on the brand of camera but a 3x zoom should be the minimum you need for distance shooting.

However, you don’t need to be shooting the most rigorous, intensive stuff to find an action camera useful. They are designed to be compact and mobile so that they can be picked up, stored, and transported with ease.

This means they may be appealing for vloggers who want to carry their camera around with them, either indoors or outside. Most action cameras also have higher than average memory, decreasing the chance that you will run out of storage space while out and about.

So, in fact, action cameras can be very useful for vlogging. However, it depends heavily on the type of vlogging you intend to do. As such it is wise to do a bit of research and prep work on the style of videos you want to make beforehand.

This can help you pick an affordable action camera with the precise features and design that you need. If, after thinking on it, an action camera isn’t a good choice for your vlog then you can save the money and invest it on a camera with better stability and more precise lens settings, or just supplemental equipment.