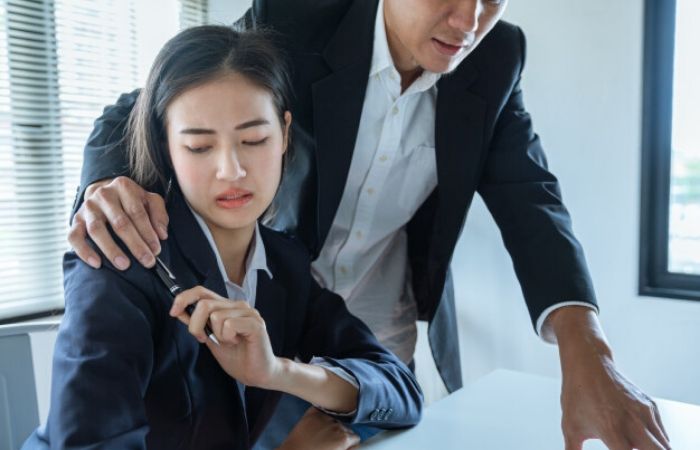 When a woman lands her dream job, she often has visions of earning her colleagues’ respect. Winning her boss’s praise and breaking through any glass ceilings. But sometimes what she gets is more shocking and demeaning.

It’s more common for women at a conference table or at work to hear bawdy and vulgar jokes from male co-workers who end their quips with punch lines that objectify women.

Some women are also the target of invasive touching, which can include a pat on the breasts or the buttocks. Still, others must continuously fend off whistling, aggressive requests for dates or loud assessments of their bodies’ sexual potential.

Can Men be Victims, too?

While women face 80 per cent of sexual harassment on the job, men can also be victims. According to the Washington Post, 20 per cent of harassment claims come from male workers. They might be propositioned or subjected to Harassment that can run the gamut from images and videos to remarks or physical gestures and assaults.

What Can You Do?

Whether the victim is male or female, these actions can be intimidating, even more so if they come from a boss or supervisor who wants to ruin the worker’s reputation and job prospects. They may tie sex to promotions, make overtime or vacation time dependent on sexual favours, or rig a demotion if the employee doesn’t engage or comply. All of this creates a hostile working environment where workers cannot thrive.

These are not fated employees have to suffer through quietly— although many do out of fear. You have rights, among them the right to work in an atmosphere that is free from intimidation, threat and sexual humiliation. There are state and federal laws to protect working professionals from all manner of sexual Harassment. Namely California’s Fair Employment and Housing Act as well as Title VII of the Civil Rights Act of 1964.

Most companies also have their policies and protocols in place to Prevent Harassment. Some forbid fraternization or intraoffice dating. However, offences still happen. Be aware of your company’s policy. Read all the rules upon hiring.

First Thing to do

The first thing an employee should do when facing sexual Harassment is to document everything. Keep detailed notes. Next, write a complaint and submit it to the human resource department. Follow up with a meeting; if you have a union, enlist help from a representative in having your concerns heard and addressed.

Submit a further complaint to government agencies, such as the Equal Employment Opportunity Commission or a similar state-level commission. You may also consider filing a police report; if the offence results in an injury or threat of harm, definitely go straight to police. However, still, tell your employer because you don’t want them to claim that they knew nothing about the incident.

In many cases, the human resources department will reprimand, suspend, fire or relocate the offending party to another department, depending on the severity of the offence and whether there is a pattern of behaviour. If the business ignores the complaint, fails to protect the employee from further Harassment, or, even worse, punishes the victim, it’s time to turn to a sexual harassment attorney in Los Angeles.

What to include in a complaint?

Complaints should contain personal data and supporting evidence of Harassment:

A civil right or sexual harassment attorney has a wealth of case law and statues on which to build your prosecution if you decide to sue. Even if you don’t want to file a lawsuit, the best employment attorney will want to provide advice through a series of consultations.

They can also help you file complaints. Sometimes, state agencies, after an investigation and interview, may opt to litigate on your behalf. Often, unions will hire and pay for legal representation for you.

There are statutes of limitations for filing sexual harassment claims and lawsuits. They vary by state. So, if an incident happens, act quickly. You should notify federal commissions within six months of the incident. State departments require complaints to be filed within a year. However, you should notify your HR department within two weeks, if possible.

Be prepared for a court battle and possibly a jury trial. Although this can be discomforting due to exposure or further hostility from the workplace, it’s worth the effort. In addition to compensation, sexual harassment lawsuits can change working conditions and prevent other employees from enduring the same treatment.

Compensation can include back pay, such as any salary or wages that are denied due to losing a promotion or firing. You would also be entitled to benefits, such as vacation pay, holiday bonuses, pay for sick days, pension or IRA contributions, stock, and other incentives.

Even if you choose to quit rather than face harassment, a jury might still compensate you. Any award would be based pm the time you spent at your job, the time you spent looking for sequent employment, your age, and how the sexual Harassment impacted your future. On top of that, your job may also be ordered to pay punitive damages and your attorney fees.

Don’t let the prospect of high lawyer costs deter you. Many firms may represent harassed workers pro bona or agree to be paid if the worker wins the case.

Is it or Isn’t it Harassment?

Some situations fall into a grey area and would not be considered sexual Harassment in some states.

For example, in California, if an employee is thought to welcome, invite or participate in flirtations, sexual intercourse or another behaviour, the incident cannot be deemed as Harassment. In other states, however, the difference in power between supervisor and underling may make still make such situations a matter of coercion and Harassment.

Another grey area includes Harassment from someone who isn’t an employee at your company. If a customer, independent contractor or vendor harasses you, that can still be considered workplace harassment. Your company must address it. They must monitor and protect employees from any harmful behaviour from anyone doing business on the premises.

New laws in California and beyond aim to stop or reduce sexual Harassment with mandatory training. For example, in 2021, a California law will make it a requirement for businesses with five or more employees to hold individual two-hour training sessions on sexual harassment prevention.

All employees, including supervisors, will undergo interactive lessons either in person or in an online classroom or webinar taught by lawyers, professors or HR leaders. This will, hopefully, make future workspaces better for everyone and reduce incidents of impropriety.

By knowing your rights, asserting them and holding everyone to professional standards of conduct, workers can achieve career goals without sacrificing dignity and peace of mind to harassers.

What are Cleanroom Standards?

Tracking Time Attendance – Why It’s Important To Automate This Task

Time Management Tips For Managing A Job And School

Teamwork Pays Off: 7 Benefits of Coworking

Razor-Sharp Focus: 7 Proven Ways to Boost Your Energy at Work

Inefficiencies You Need To Fix ASAP In An Organization

What’s on the Horizon for Natural Language Processing

How to Protect Your Business Information Systems and Data Secure

Unlock Some Essential Facts About ETL and Data Warehousing