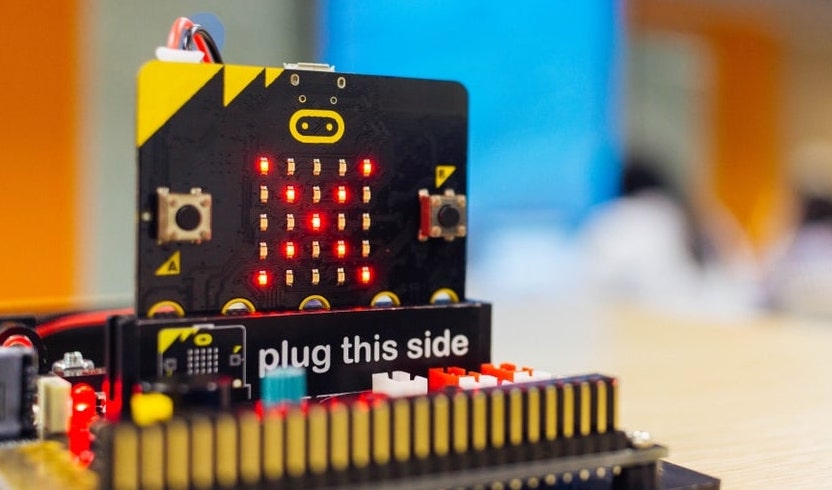 The BBC micro:bit has taken the educational world by storm. Used by over 20 million children across the world, this tiny computer allows students to learn all about coding, boosting their creativity and developing knowledge into coding languages, software, hardware, and the process of designing and iterating ideas.

micro:bit is much more than just teaching kids to programs – it’s about developing skills they can use across countless other subjects and areas of their life, through coding. Here’s why the micro:bit matters, and some of our favorite ways you can teach kids the basics of coding with it.

A tiny computer that’s smaller than a credit card, BBC’s kid-friendly technology comes packed with a whole host of interesting sensors such as an accelerometer, light detector, and thermometer, and LEDs, that can all be programmed by the user.

Users can easily connect it to a computer and code, and the options are rarely complex or technical to make. The main advantage of using micro:bit is that it can be helpful in everyday objects too.

For example, Users can turn a shoe into a footstep tracker, or it can be told to play music when an item is moved. In essence, it is all about technological play, which is one of the reasons why it’s so popular.

Simple and intuitive, it is easy to pick up for kids and has enough features to let their imaginations run wild. Importantly, it can be used to program the micro:bit, utilizing its motion detection, compass, Bluetooth, and LED features.

For kids that understand the fundamentals of coding or who want to learn a real-world language (that’s the fourth most popular in the world, according to Statista), there’s Python.

Using the BBC’s free online Python editor, you can program in LED images, utilize the micro:bit’s buttons, and even get it to respond to gestures, thanks to the in-built accelerometer. These sorts of projects make it an excellent option for getting across the many different uses of programming to children.

Another block-based coding language, MakeCode is super simple but comes with the option to view the code in JavaScript, the world’s most popular code, too.

This is a great feature that, in essence, teaches kids two languages, but one that is simple enough to accommodate newbies. The language is useful in different projects, taking complete advantage of all the micro:bit’s features.

The micro:bit is an exciting and intuitive tool that’s making sure kids have the skills they need to succeed in our digital future. Have you used it? Tell us how in the comments section.