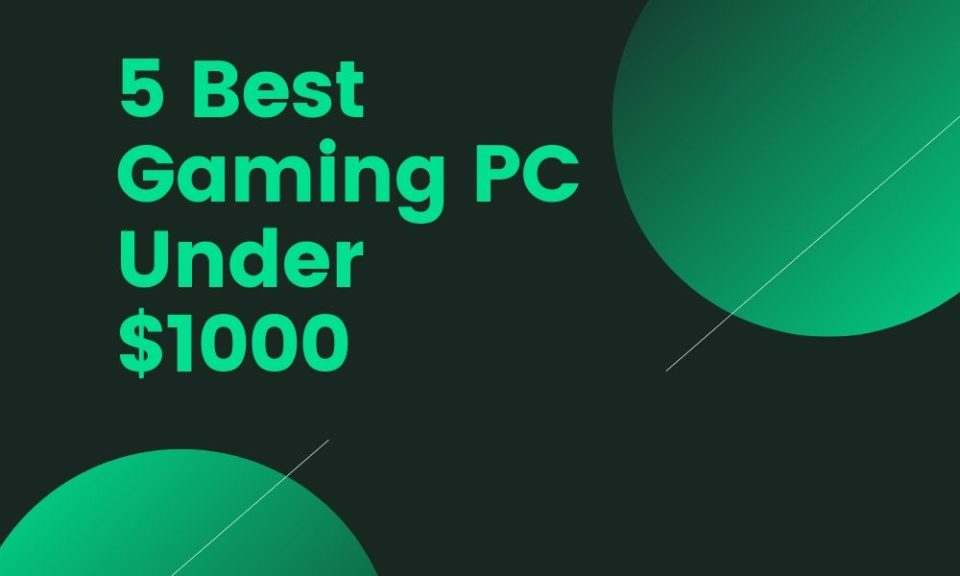 A solid gaming PC is a must if you want to play any type of competitive game. Unfortunately, most people who look for gaming PCs get overwhelmed by the sheer amount of options out there – and that’s before they even start looking at the prices.

If you want to get a great gaming PC, you really don’t have to break the bank. In fact, there are a number of fantastic options that you can build for under a thousand dollars.

Below are the five best gaming PCs that you can buy today for under four figures.

If you are an old-school fan of gaming PCs, you’ll probably be amazed that you can pick up any Alienware PC for under a thousand dollars.

The brand is having a bit of resurgence after Dell fumbled the initial acquisition of the company, and the Aurora R8 is a great example of a really solid but low-price gaming machine.

This one sneaks onto the list by providing a really excellent experience for a price point under nine hundred dollars, though it’s by far the weakest PC on the list.

It’s low on RAM and only features an i5 processor, but the whole package is good enough to keep you happily gaming for at least the next few years.

The Dell XPS Tower SE is definitely a computer at the top of the price range, but it’s simply amazing considering what you’re getting.

Though it only manages to beat the limit by a penny, it’s one of the very few VR-ready PCs out there for under four figures.

The i7 processor and Nvidia GeForce GTX 1050 Ti are fairly expensive in and of themselves, while the 2TB traditional hard drive and the 256GB SSD are excellent extras.

The only downside here is the 8GB of RAM, but there’s enough room for expansion and replacement that you can tackle that particular hurdle when you get there.

This iBuyerPower PC is a steal at under seven hundred dollars and boasts some fairly nice upgrade. It has 16GB of RAM, a 2TB hard drive, and has a 3.5GHz six-core processor.

Though there are certainly faster and burlier computers out there, this one comes in a price point that will let you upgrade to your heart’s content.

The only real downside is the NVIDIA GeForce GT 1030, which is a decent but not jaw-dropping video card. At this price, though, you can afford to upgrade your card and still come in well under your budget.

This offering from iBuyPower is a little bit heftier than its cousin above, but it’s also at the extreme end of the price range.

Though it only comes with 8GB of (easily upgradable) RAM, it does pack in a two-terabyte traditional hard drive alongside its 240GB SSD.

A fantastic platform for playing modern games, it’s also future-proof enough that you can keep upgrading it for years to come.

CyberPowerPC’s Gamer Xtreme is probably the most budget-friendly gaming PC on the market today.

Popping in with nearly identical specs to the Alienware Aurora R8, it’s fifty dollars less but includes both a mouse and a keyboard.

CyberPowerPC’s are also incredibly easy to upgrade and are accompanied by great customer support, making them a must-have for anyone who just wants a solid platform to get them through the next few years.

Though the computer is absolutely outclassed by a few of the others on the list in terms of raw power, this one has the combination of excellent performance, good reputation, and solid build that makes it a great choice for anyone who is on a budget.

You don’t have to break the bank in order to get a great gaming PC. Each of the five computers listed above will cost you less than a grand, yet they’ll all let you be competitive with everyone else on the internet.

I’m gone to convey my little brother, that he should also pay a quick visit this blog on regular basis to
obtain updated from newest gossip.