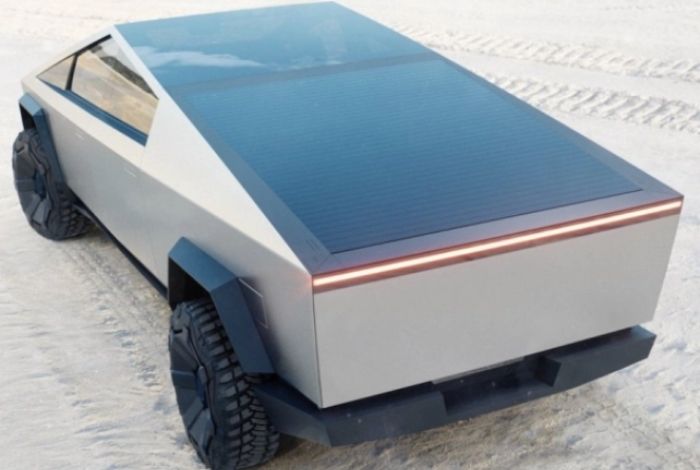 It’s a plane; it’s a Starship with wheels, no it’s the new much-hyped Tesla Cybertruck. Tesla is known for its cutting edge and risky design, but the new high-tech truck is almost out of this universe. It doesn’t look anything like a pickup truck but performs like a Ferrari.

The truck has ferocious design features that resemble a stealth fighter jet with wheels. It seems more like something you would see on the next set of Star Wars or Rambo, not a truck ready to take the kids out to the movies or the dog for a walk.

Elon Musk, Tesla’s renegade founder, revealed the much-anticipated electric cyber truck at the company’s Hawthorne California design studio. The secret project has been one of the most anticipated reveals for the struggling, unprofitable electric car company.

When the Cyber truck was revealed, many in the audience gasped, and couldn’t believe this was the much-hyped truck of the future.

The extremely sharp angles give it a trapezoid look, which is way more aggressive than anything on the market. Instead of a separate front cab and enlarged open back bed, the entire body of the Cybertruck is uniform. The exterior has some advanced stainless-steel alloy, which is also used in Musk SpaceX Rockets.

The extremely safe alloy is also very strong. Elon claims the truck is bulletproof and will be able to withstand small firearms but not assault rifles.

To demonstrate the strength of the Cyber trucks, body, Musk brought a man on stage with a sledgehammer. He repeatedly hit each side of the truck, appearing not to damage it at all. While that seemed to be impressive, the next demonstration did not go quite as well. Musk ordered a guy to throw a ball at the truck’s windows, which were touted as unbreakable.

The ball was not even thrown that hard and easily broke the purported unbreakable metal glass. Musk quickly saved face, making a joke that the ball didn’t go all the way through, and tried to put on a smiling face. Clearly, musk was very pissed off about the mishap with the windows.

The Cybertruck has a Low Base Model Price and Phenomenal Power

As predicted, Elon Musk has been touting the truck’s performance capability. He’s gone directly at the market leader, the ever-popular Ford F-150 truck. Musk has made several statements that the Cyber truck would out pull, and outhaul a Ford F-150 and perform like a Porsche 911.

The high-end model of the Cybertruck is known as the Triad motor all-wheel drive. This model will be able to carry around up to 3500 lb.

The Cybertruck Has Secret Storage Compartments

At first glance, the Cybertruck doesn’t look like it has all that much storage room. However, looks can be deceiving. The Tesla truck has a storage room in places most competitors don’t. It has an additional storage room available on each side and also under the hood. The back bed of the truck has a sliding cover, which also reduces wind drag.

One of the features many people will probably like is you can adjust the height of the truck depending if they are cruising down the interstate or on an in rugged off-road conditions. The truck uses what’s called an adaptive air suspension system. One of the things buyers on a budget should consider is the cost of insuring the new electric Cybertruck.

This is for several reasons, like the unique materials that are very expensive to repair and replace. However, Tesla does have its own in-house car insurance program that could save owners quite a bit.

To the surprise of many analysts who follow Tesla, the new Cybertruck will be somewhat affordable, with prices for the base model starting at just $39,900. This is certainly an attempt to draw away Ford F-150 buyers. The F-150 that is moderately equipped with extra features starts at around the same price point.

As you might suspect, however, the high-end version with all-wheel drive is quite a bit more costly. It starts at $69,900, well above Ford and Chevy’s trucks. Another feature that costs $7,000 is Tesla’s optional self-driving package. In the near future, Tesla plans to roll out advanced software that will make almost all of Tesla’s autonomous.

Many analysts predict Tesla’s truck will be a popular niche product at best. Both Ford and Chevy have such a stranglehold on the market. The new Cybertruck is so extreme in so many ways; most people don’t see Tesla’s Cyber truck taking significant market share away from its two largest rivals.

Then there is the new start-up called Rivian. The Michigan-based company plans to release its own version of an electric truck within a year. The new firm has some serious backers, including Amazon, as an investor. Rivian plans on keeping traditional styling on its truck models, but its base model will cost more than Tesla’s cyber trucks entry-level model.

This is an exciting time in automotive development, with a major paradigm shift towards electric vehicles. Only time will tell if Tesla will become a dominant player, or if older, more established brands will dominate electric trucks going forward.

VikasVarma is the Tech writer for TechMediaToday. He writes about Technology, Softwares and Alternatives. His articles were published in some of the major publications. PubG is always his Favorite game