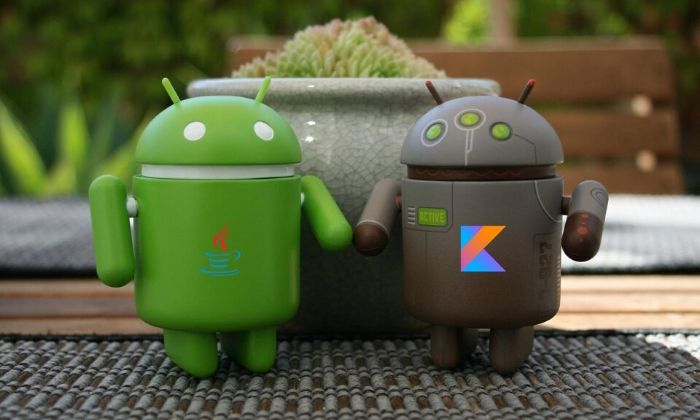 Switching from Java to Kotlin for Android sounds interesting, isn’t it? It’s quite simple to understand why we switch from an existing thing to a new thing. Let me help you recall, when do we change phones? When some advance features come in new phones that are not there in our existing phone. Right?

Similar is the case when we talk about Java and Kotlin. We know very well what Java is. Come let’s see what Kotlin is and what are the new exciting features that it has got to overtake Java.

Kotlin is a cross-platform, general-purpose programming language for Java Virtual Machine(JVM). Kotlin is developed by JetBrains and was first released in February 2016. It’s the latest version is 1.3.61 that was released on 27 November 2019. Kotlin mainly targets JavaScript, JVM, Android, and Native.

Since it works on JVM, it can be used almost anywhere Java is used, and in many other platforms as well. It can be used for client, server, web as well as Applications.

Google on 17 May 2017,  announced that they’ll be officially supporting Kotlin for Android development. In fact, many of google applications have started to be written in Kotlin. Soon with no astonishment, Kotlin could be a Standard for Android Development.

Let’s now see some important features of Kotlin and then we’ll move towards the most impressive features for Android Developers:

Kotlin and Java are 100% interoperable. We can easily call Kotlin codes in Java and vice versa. This enables easy programming in Android as we can have an old file in Java and new in Kotlin.

Ever since it was developed by JetBrains, they’re also using it for their development works. In fact, after the support from Android and Google, they’re more interested in working for developing it.

Kotlin has got more functions than java and its coding is done in fewer words than Java and in a more descriptive manner. It’s easy to read, maintain, and make changes when required.

Kotlin has a very supportive community that is always available, and highly responsive for developers’ help.

It shows the errors at the compile time itself, making it less erroneous. This feature makes Kotlin way faster than Java.

7) Easy to Learn and Improve:

Kotlin, for a Java developer, is very easy to learn and fun to use. We have Automated Java to Kotlin converter in Kotlin plugin making it easy to start initially with Kotlin.

The above mentioned were a few basic features of Kotlin. Let us see now why Kotlin suits better than Java for Android Development.

Also Read: Kotlin Vs Java -Which is better for Android App Development

Kotlin eliminates the issues of Null reference also known as Million Dollar Mistake. Many programming languages including Java, throws NullPointerException during execution. This exception can sometimes lead to application failure or system crash and even data loss.

To assign Null in Kotlin, if we do the following, it’ll generate an error.

Therefore, We use the Nullable type to assign null.

Kotlin supports Lambda Expressions which is not declared but passed directly as an expression. Lambda more or less is an anonymous function as it has no name.

We can use them as values and can be passed as arguments to methods. They could be used in every way like a normal object.

We can declare lambda using the following syntax

For any Android developed Application, it’s important that it works faster. Lazy-Loading feature of Kotlin actually keeps it in mind and hence is used to load the things faster. This feature increases the speed of initial loading and later, slowly loads the less important content and the pages.

With the help of this feature, android developers can prioritize the primary resources. This ensures the fast loading of important resources over secondary resources.

It’s also known as Standard library function. This feature by Kotlin helps Android developers in many ways during programming. Other languages provide developers the ability to add functions in classes. The limitation here is that the developer can create as many functions as he wants in classes, but, cannot expand it.

On the contrary, Kotlin provides these functions like extensions, which makes it easy to add new functions in the existing class. It also provides developers with a robust choice of standard functions.

POJO stands for plain old java output. It is a normal Java object that is not bound to any restrictions other than those forces by java. POJO class in Java is different from POJO class in Kotlin as Kotlin takes care of all the Getter and Setters as well as Hashcode and equals methods for the users.

So coming to the last part of this article, wherein we’ll sum up what we’ve understood. We can clearly see, that the differences between Java and Kotlin are worth a note.

Kotlin has got many features that improve the functionalities of Android applications without any doubt. Recall, features like Lazy-loading, Null-Safety feature, smart compilation, interoperability with Java and whatnot.

Rahul Patodi is a Big Data Architect, He works on the latest cutting edge technologies (Big Data, Data Science, ML, DL, AI...), that are transforming the IT world.