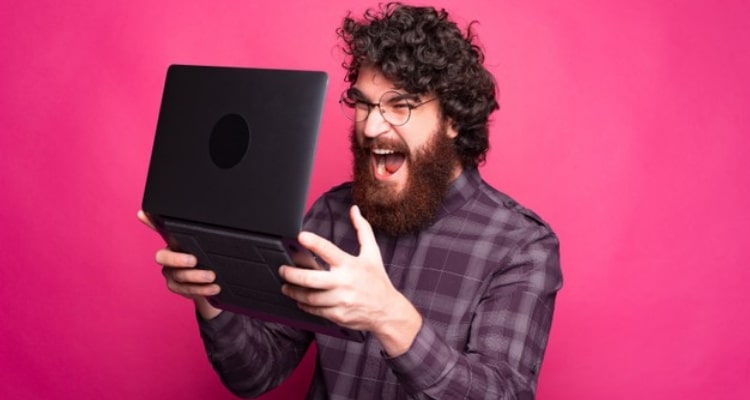 The Internet is a core element in most people’s daily lives. After all, people average almost two and a half hours of social media on a daily basis. That’s not counting any time they spend checking email, researching products, or work-related tasks.

In a world so deeply saturated by the Internet, the issue of low bandwidth is more serious than it sounds on the surface. If you’re hanging out at home, it may not hinder you too much.

If you’re running a small business with a cloud-based POS system, it can cripple your ability to conclude purchases.

Before we jump into how to deal with slow internet connection, let’s take a look at how you spot poor bandwidth.

Low bandwidth isn’t always obvious when you’re on the Internet. For example, let’s say you mostly visit text-heavy sites. The bandwidth you need for loading those pages is often comparatively low.

Where you will most likely spot a slow internet connection is when you stream video or launch a streaming video game.

You see related problems when you try to play streaming video games on a slow internet connection. Sometimes, the game won’t load. Other times, the game proves extremely glitchy with the video cutting out or the server booting you from the game over and over.

For businesses, the problem usually translates into tremendous lag on cloud-based apps. If you notice these problems, the most likely culprit is a bandwidth issue on your end.

Modems and routers are like any other piece of hardware. They can get kind of buggy over time. If you’re like most people, you turn off your phone and even your computer occasionally.

The same isn’t true for routers and modems. Those typically run 24/7/365 unless the power goes out at your home or office. That’s a great way for problems to grow slowly over time.

One day, you find that your computer can’t seem to load any websites. This problem yields to a simple fix.

You can hit the reset button on them. It’s usually located on the back right next to where the power cable plugs into the device. If there’s no reset button, you can cycle the power by unplugging the device and plugging it back in.

This lets whatever firmware or software guides the devices refresh, which can fix bandwidth problems.

Sometimes, the available bandwidth itself isn’t the problem. You may indeed get all the bandwidth you’re paying for, but see lousy performance on your laptop or gaming system.

You can also try moving the antenna around a little. Sometimes, a different angle will produce better signal strength.

Stay Away from Bandwidth Hogs

Certain apps and programs will simply chew through your available bandwidth. While running, even in the background, they can leave your regular internet surfing experience a hot mess.

A few common examples of bandwidth hogs include:

Wondering how to get higher bandwidth? Close those apps, pages, or processes. It won’t necessarily change your basic available bandwidth, but it can free enough for a smoother experience.

Wired connections often end up as more of a pain than they’re worth for devices like laptops. They tether you and the device to a fixed location, which makes the laptop a lousy substitute for a desktop system. Most people get a laptop so they can move around with it, not sit within a few feet of the router.

For desktop systems or game consoles located near your router, though, wired connections often provide far superior bandwidth. That can maximize your desktop and gaming experience. It can also dramatically improve your streaming video or gaming experiences on those sites.

For businesses, wired connections may work for devices that don’t move. After all, even if you use a tablet for your register, how often will you move it once you set it up? You probably won’t move it very often.

If you use mobile devices for inventory checks or placing orders, however, a wired connection just isn’t on the table.

While that desktop system, laptop, or gaming system was cutting edge when you got it, it doesn’t mean the device kept pace. In many cases, you may discover that assuming the internet is slow isn’t the case.

It may not matter how much bandwidth your Internet package promises or the quality of your wireless router if your device isn’t built for the current Internet. After all, the PS4 carries 8 GB of RAM. That was a lot when it launched in 2013.

Many desktop systems these days come standard with 12 or 16 gigs of RAM.

If you’re getting poor performance because your hardware has aged out, upgrades offer the only solution.

There are several practical steps that will help you deal with low bandwidth issues. Always start by resetting your router and modem. It often fixes the issue with the least hassle.

You can boost your signal strength by repositioning your router, adjusting its antenna, or upgrading the router. Close out bandwidth hogs like game downloads or BitTorrent programs. You can also try wired connections for devices that stay near the router.

If all else fails, check your device hardware. You may discover the device can’t handle higher bandwidth.

You can find more Internet-related advice in our Internet section.