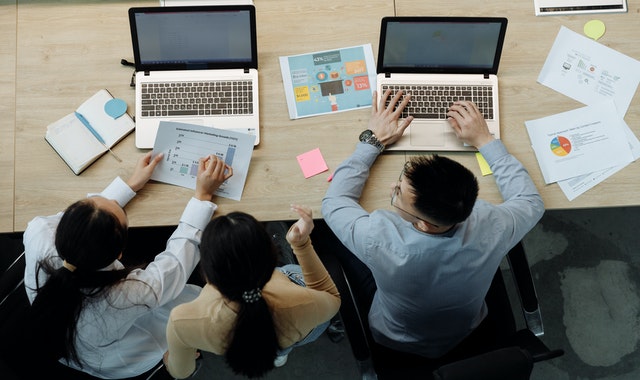 Like any other craftsmen, developers have tools to help them do the work and optimize their work processes. Visual Studio dev tools are one of the first that may come to one’s mind and probably the most versatile available solutions for programmers.

Why developers use Visual Studio, and what industries can benefit from having a Visual Studio developer as a valuable asset in the team? We discuss these and more below.

Who Is a Visual Studio Developer?

To begin with, Visual Studio is an integrated development environment. Or, simply put, it is a multifunctional platform for managing and optimizing numerous tasks in software development. With this IDE, a developer can create iOS, Android, and Windows apps; develop cloud services; perform app testing and debugging, and much more.

Visual Studio developer is an expert in one or more programming languages, whose primary go-to IDE is Microsoft Visual Studio. Their operating languages can be anything from Python to C++, C#, and .Net.

Before looking for a Visual Studio developer, it’s important to understand that a programmer is not a jack of all trades that can solve code-related issues with a mouse click in this IDE.

Every experienced programmer is a T-shaped expert with deep knowledge in a defined sphere that can write clean code, run tests, optimize software, and more. However, developers of different skill sets and expertise can use this IDE for their development projects. So it’s crucial to define the project goal, technology, and resources needed before looking for a developer with relevant experience.

To put it simply, Visual Studio is just another tool that simplifies the work of the seasoned professional, just arguably the best and most usable one. On average, a highly skilled Visual Studio developer will have the following skillset:

To sum up, looking for a Visual Studio expert can be a straight shot to the ideal candidate. However, the full extent of a developer’s abilities is not limited to their expertise in the Visual Studio itself. If you need to hire an ideal candidate working in this IDE, look for a highly versatile full-stack programmer with a proven experience in your industry or field.

A programmer with similar skills and experience can earn $24/hour if based in the UK, and the highly versatile Ukrainian programmer working in this IDE earns only 15$/hour.

Top 6 Industries That Need A Visual Studio Developer In 2021

According to the Emarketer survey, about 90% of time spent on mobile is dedicated to mobile apps. It proves an ever-growing interest of businesses in all industries in boosting their revenues and brand recognition by creating mobile apps for literally everything, resulting in high demand for Visual Studio programmers. Some of the top industries that need Visual Studio skills include:

With the fast-paced digitalization worldwide, all stores invest in mobile development to enhance customers’ overall experience and promote their brands.

The IDE provides all the necessary tools for developers to create, beta-test, and launch both simple and complex eCommerce native mobile apps for Android and iOS and cross-platform apps for Android, iOS, and Windows.

The other quick-rising industry requires seasoned coders to build financial management platforms and applications. With the rise of bitcoin and other peer-to-peer payment systems, the need for developers to create platforms, easy-to-navigate apps, digital wallets, or apps for banks to satisfy the client’s needs is immense.

Mobile wallets are viewed as a next-gen tool, with an estimated rise in tech market transaction value worldwide of $14T by 2022. Thus, such coders working in FinTech can build complex financial management solutions, usually with Python, Java, C++, С, or Go.

Virtualization of all processes in 2021 was rapid and horrendous, and so the educational industry did not go out of it untouched. Due to moving all classes and homework management online, it is little wonder that the demand for versatile coders that can build educational platforms, thus enhancing the online learning experience, is high and growing.

Gaming is a booming industry that will continue developing that rapidly in the upcoming years. With Visual Studio dev tools and deep knowledge of C++, a programmer can create professional 2D and 3D games.

Besides, Visual Studio provides a Unity sub-system that enables creating games that will run on various platforms, from mobile to Xbox and other consoles. This technology helps speed up the game development with various handy functions for setting breakpoints, evaluating variables, and creating complex expressions.

VR and AR applications are picking in popularity, causing an ever-increasing need for programmers and designers. Augmented reality is hard to design, in the first place, but not so complicated to code, and there’s a need for Visual Studio developers in this industry, too.

Like creating games, VR apps can be built within the Unity sub-system accessible for more than 21 platforms, including mobile, PC, and consoles.

A lot of classic apps can be created with .NET, C#, and Visual Basic, so healthcare also relies on Visual Studio programming.

Visual Studio developers are versatile experts that can build simple mobile apps to complex CRM software based on the company’s needs. When talking about Visual Studio programmers, people usually mean a skillful developer or proven experience in the particular field and a strong skill set.