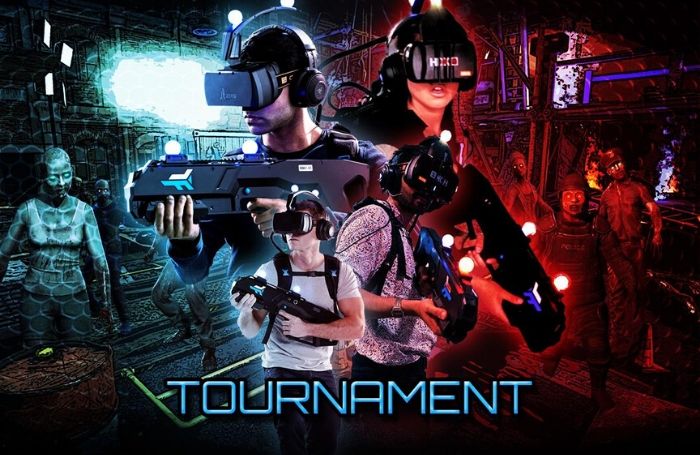 Virtual Reality has taken the world by storm. No longer only interesting to a small niche, the whole world seems to be into VR. While you could spend hundreds, or even thousands, of dollars on your own personal VR system, you can also take a trip to MindTrek VR’s virtual reality arena!

Located in the heart of Massachusetts, MindTrek offers a variety of games that you can play alongside with your friends! Once you’re equipped with your VR headset, you will enter one of the specially designed arenas and you’re game will begin!

Be warned, this is not your average video game!

MindTrek gives you multiple opportunities to battle robots within the virtual world. Both games, SOL Raiders and Singularity, pit man against machine and each other for an intense and ridiculously fun experience!

In SOL Raiders, you and your friends will be the last remaining fragments of the human race. The world has been taken over by robots and aliens. Their main power source, SOL, has been hidden somewhere on Earth, and it’s your job to find it!

You’re wearing big, robotic armor and equipped with various blasters and guns. But be careful, because everyone in the game is looking for the same SOL and if you aren’t the first one to find it, you can’t call yourself a winner.

This player vs player game can be considered a combination of the Tom Cruise film “Edge of Tomorrow” and the hit gaming series “Halo” integrated into a one-of-a-kind virtual reality experience.

Also Read: How Extended Reality Can Be a Modern Day Game Changer

Singularity is another virtual reality game that lets you play as part of a team as you fight the robots and drones.

A top-secret military space station has lost contact with Earth. You and your team are sent to investigate, only to discover that rogue AI is the culprit. You’ll have to attack the machines to save the space station.

The zombie apocalypse has reached MindTrek VR arenas! Offering two games in which you can battle the undead, this is your chance to show off your survival skills and prove to your friends why, if a zombie outbreak happens in the real world, they should have you on their side!

A virus has spread across the globe and transformed most of the human race into flesh-eating zombies. The dead are rising up and the future of the human race is in your hands. Attack helicopters are blaring overhead, firing their weapons, but you and your team are on the ground, directly combatting the undead.

Supplied with a variety of machinery including various guns and rifles, you’ve found a shadow group that seems to be in charge of the contamination. You’ll need to follow, infiltrate, and destroy them as you find a cure. You are humanity’s last chance!

MindTrek’s second undead game leaves you stuck in the middle of a zombie attack. Help is on the way, but they’re not there yet. What are you supposed to do in the meantime? The only thing you can do: try to survive.

You and your team will build barricades, hide, and, of course, fight the undead. Hopefully, you’ll be able to hold them off until the backup arrives!

If you’re not into fighting robots or zombies, don’t worry, because MindTrek has multiple puzzle games that are fun, engaging, and out of this world!

In this game, you’re trapped in “The Cube” an otherworldly, confined space that can send you across different realities and fantasy worlds. Your goal is to escape The Cube and return to the real world!

This puzzle game is a brain teaser that tests your logic and spatial intelligence in a brand new, out of this world virtual environment!

When you put your virtual reality headset on, you’ll be transformed into an all-powerful, ancient alien who has been separated from his tribe. You’re going to need to travel through a transcendental fantasy world in order to be reunited with your clan.

Everything you thought you knew about reality will be tested when playing Engineerium!

Virtual Reality arenas are not only changing the way we play games, but they’re also impacting how we interact with each other. These VR games give you a chance to live out your inner fantasy while simultaneously working with a team consisting of (hopefully) some of your best friends!

MindTrek VR has two arenas in two locations across Massachusetts. Click here to learn more about the games that MindTrek VR offers!