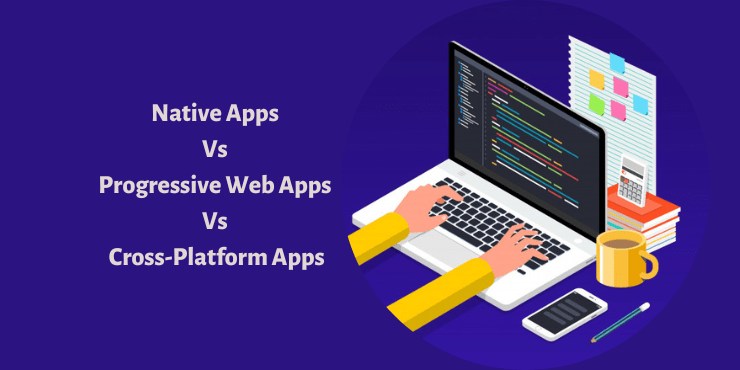 Choosing the best mobile app framework can be daunting. It’s quite difficult to choose from a wide range of options available out there.

What’s more, there are a lot of considerations outside of the framework that can impact your app as well. You should decide how much time you have and also figure out the total amount you can afford to invest in development.

Today, in this article we will discuss the what exactly are Native apps, Progressive web apps and cross-platform apps and their key differences.

Let’s talk about the first-party native apps, first. There are the tools created by iOS and Android developers. Apple makes iOS and the Xcode development toolkit that allows you to create native iOS applications and use them to your advantage in Objective C and Swift.

Google, in its turn, provides users with an efficient development environment, Android Studio, which makes it possible to create native Android apps in Java and Kotlin.

The most notable benefit of using first-party native apps is that you can get a native user interface and user experience. In layman terms, your iOS buttons will look and feel like iOS buttons, the swipe functionality will also be up to the mark.

All the features will be baked in and you’ll get them for free. The only downside is the development speed that leaves much to be desired. Your team will need to spend additional time elaborating on each and every feature you want to implement.

Essentially, devs will need to create the same app twice, since Apple and Google use different programming languages.

Thus, devs find themselves unable to use the same code twice, which also increases software development costs and puts additional financial burden on you.

Progressive Web Apps are essentially websites running locally on mobile devices. With such tools, devs can quickly create the UI just like they would for any website.

There are many different technologies available from Microsoft’s Blazor, Native Script, and AngularJS. The benefit here is that you might already have a team of web developers that created your business website and can easily repurpose their skills to create a professionally-looking mobile for you in a shortest possible time.

Code written by your devs will be able to run on both iOS and Android, which means there will be no need to rewrite code for different platforms for multiple times.

This allows saving a bundle on development. On the downside, your users won’t be able to enjoy the same UI and UX as that offered by native apps.

The reason behind that is that your devs will need to recreate those tools and UI elements that would otherwise get for free when using native solutions.

The last category we’ll discuss is cross-platform native apps. These are frameworks that allow you to create totally native apps and provide access to every single iOS and Android API.

What’s more, they allow writing the app in the same codebase so that code can be shared between iOS and Android apps.

With cross-platform native apps, coders don’t have to rewrite anything like they would have to if they use the first-party toolsets.

As a result you get fast development speed, because your app is being written in one language. The performance is also just as high and fast as if you did create your app in Xcode or Android Studio.

Among the mature technologies that are now effectively used for developing fast and high-performance mobile apps are Xamarian, Ionic, and React Native.

Other efficient tools you may want to consider when developing your mobile app is Cordova, Flutter, and Corona SDK.

We highly recommend that you consult with your app developers prior to choosing any specific tool wherewith you’ll be creating your app.

Take advantage of professionals’ experience, expertise, and skills to create a product that will not only become good value for money but also bring in more profits.

Hi
I have read this article. Thanks for the sharing.