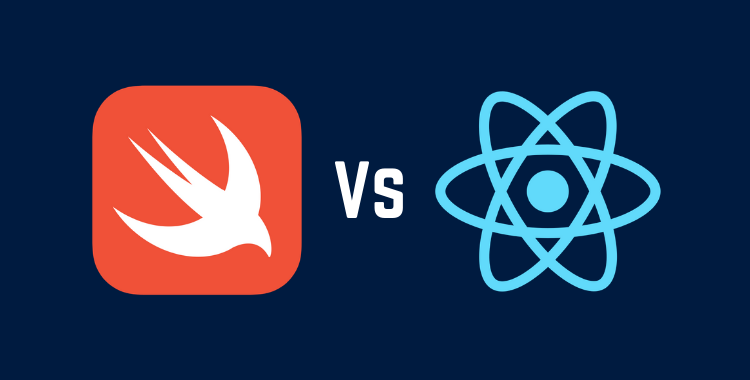 React Native and Swift are both relatively new technologies that support the mobile app development for ios apps. React Native is a framework for javascript, while Swift is a brand-new programming language. Many developers often confuse in choosing between Swift and React Native to create IOS apps.

Here in this article, we will compare the swift and react native features to help you select the best one for your ios app development.

What is React Native?

React Native is an open-source framework designed and supported by Facebook and used for cross-platform mobile applications. The framework allows you to create native apps for ios and android platforms with a single javascript codebase. It uses the React.js library to create an accurate native mobile app. It has 78.3K GitHub stars and 17.5K forks on GitHub.

Swift is the official framework created by Apple. It is used to develop native apps for IOS devices, including iPhones, Apple computers, AppleWatch, and Apple TV. Swift operates with Apple’s  Cocoa and Cocoa Touch frameworks.

It is the best option for creating projects with sophisticated infrastructure, complex integrations, and native iOS features, such as in-app payment. It has 48.2K GitHub stars and 7.71K GitHub.

Also Read: Kotlin Vs Java – Which is Better for Android App Development

As Swift is a native language designed for creating powerful IOS apps, it automatically integrates with the IOS designs and leverages all the UX principles.

Simultaneously, to create a mobile app on Swift, the development team must code a native app from scratch and polish every app designs elements separately.

On the other hand, React Native is powered with javascript and leverages the internal APIs to run native elements that adjust to every screen size. The user interface is the same in the native one and also so much easier to code.

Additionally, all the app elements will be displayed appropriately on numerous screen sizes, including iPhone, iPad, and so on.

Swift is considered as one of the most time-saving option to create an IOS app. It makes app development easier by eradicating the drawbacks of Objective C.

And on the other hand, react native is a perfect choice if you want to create an app for both the Android and IOS platforms simultaneously.

Performance is considered as the essential thing in mobile apps to know which framework is best. It is mainly determined by the three crucial factors: CPU usage, allocated memory, and energy impact for various tasks.

When developers create a mobile app using React Native, they create modules to leverage internal APIs and libraries independently. As developers include a middle-man between the code and platform, there are high chances to impact the app’s performance.

At the same time, the cost of one hour of React Native Developer is the following:

Swift vs. React Native: what to choose for your project?

To give you a clue, consider the following:

By choosing the right programming language for your ios app, you can lessen the development costs, improve app productivity, and enhance ongoing app support.