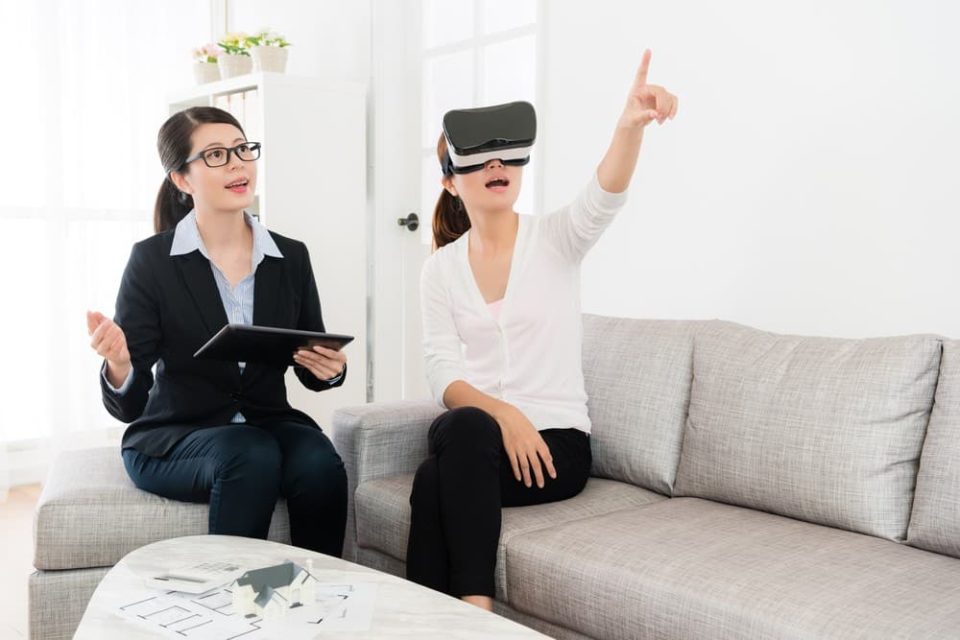 Virtual Reality (VR) is slowly making its way in into industries that you wouldn’t expect it to. From construction to real-world social experiments and the film industries. But one of the most interesting ways in which we could use VR is to weave it into the world of real estate. The idea that we could merge this technology with one of the most important industries in the world would mean that we’d be changing the world. And while it has been done to an extent in certain parts of the world, for it to become a mainstream practise that develops into a familiar process is exciting.

What is Virtual Reality?

In the easiest way possible, virtual reality is just a staged/ simulated environment that offers limitless possibilities. Just like computer-generated imagery (CGI) in a film or TV show, CGI in a VR ‘world’ means that you can copy the real world around you, or you can create something completely different. You can develop a new, never before seen universe in which anything and everything is possible.

VR will usually require a headset which is often paired with 2 controllers or gloves that act as your hands in the VR world. Within the headset, there is a gyroscope to allow for a simpatico relationship between your head in the real world and the head/ camera in the VR world. This means that as your head turn, so will the camera.

The merge of VR and Real Estate

When buying a new home, you often travel far and wide to find the right one for you, and you often view a number of houses before you make a decision. In fact, research suggests that on average, UK buyers will view four to eight properties before realising that they’ve found the right home for them. However, 10 % of buyers will be even more indecisive and view a total of 16 homes before they’ve made a decision. But this takes up so much time and can consume every minute of aver day while you’re searching for a home.

In comes VR, VR would allow for its user to view a property from their own home. Whether that means that they’re in their lounge, the kitchen or even the garden. The very nature of VR means that you can be anywhere you want to be, all while staying in one place.

So, a guided tour is something that everyone gets when they go for a property viewing. The estate agent will walk you around the house and tell you about the rooms and all of the potential that they have. But going out to the property could mean that you’re driving for an hour or two, just to get there and hate the house instantly. Instead, you can log into a system that connects you to an estate agent at the house and you can be guided around the property.

This could also be done in groups to save time for the estate agent and the customers. Or, this could be done on a customer by customer basis to allow for a more personalised approach.

An interactive VR tour would mean that you get all of the benefits of a guided tour, just without the guide. You’d be free to walk around the house and go into any room you like rather than following a set walkthrough.

You would also be able to interact with parts of the house; this would mean opening doors turning on lights and even customising the property. There’s a possibility that set, changeable aspects like wall colour would offer a slightly different experience.

A customised visit would mean that you could walk around the property and change almost anything inside. So, you could load on a sofa or a dining table and position it anywhere you like.

While this kind of thing would be slightly over the top and could potentially have a huge cost connected to it, as time goes on, it wouldn’t surprise me if this is the way we move in the future.

The benefits of VR in the Real Estate industry

This is a rather obvious benefit of VR in this sense. Using VR means that you won’t have to travel to a specific place to view a house straight away. You’re able to fall in love with a property right form your own home. Similarly, it takes the frustration out of travelling an hour to see a house, just to arrive and decide that you don’t like it and that you’ve wasted your time come here and having to go all the way home.

This is directly linked to the above point; being able to stand in your own lounge and see another property means that you can decide whether it’s worth visiting the property and going all that way to take a look or whether it’s not in line with your needs.

Because VR actually puts you inside the house, it means that you’re more likely to get a real feel for the property that you can’t get from a static image listed on websites like Zoopla or Rightmove.

VR would act as a great investment for the future, although the technology may need some time to develop and convert into a streamlined process for this particular use. While VR has been around for such a long time, it may need a little longer for a purpose like this. VR in real estate is a very real thing and is already in operation so it’s possible and not that far away! It would revamp the property industry and offer a variety of ways that it could grow.

The idea that you could picture yourself in someone else’s home is a difficult thing to do, especially if the property is already filled with personal effects. But with a customisable VR experience, it would be made easier than ever because you’d be able to place familiar items within the property you’re viewing. For example, you could place a sofa that looks like yours into the VR world and recognise the space. It might make the room feel more like home.

Virtual reality technology could be the future for so many industries and while it may be easier to incorporate it into things like gaming or entertainment, having this technology delve into the world of real estate would create so many opportunities for growth and development on several levels.

Aaron Cambden is the managing director at Fairview Estates Nottingham , a local, award-winning estate agency that prides themselves on their quality of services. Having won the ESTA award 3 years in a row now, Aarron is a passionate agent looking for new ways to develop the real estate industry.

Top 5 Best PlayStation VR games you Should not Miss