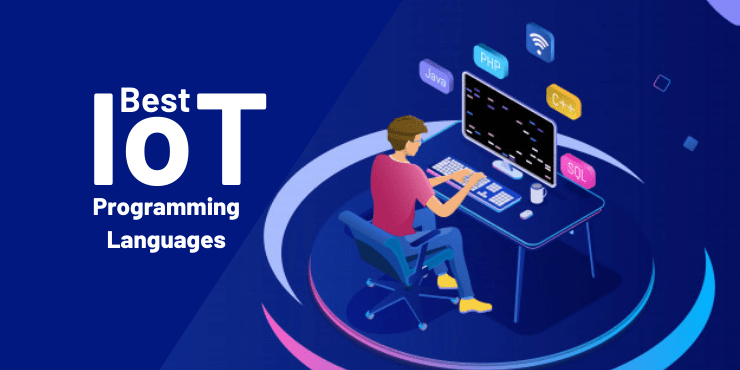 The advent of the internet was just the beginning. Today, the Internet of Things (IoT) has integrated itself into our reality.

The Internet of Things enables anyone to be able to operate and track any device from anywhere in the world, and all you’ll need is your phone or a console.

So, you can turn off the heat in your United States home while vacationing in Bali. You can get your virtual assistant AI device at your Texas office to search for a custom writing review while at an auction sale in Australia.

The programming languages used in IoT are the same ones used for desktop and mobile apps, operating systems, servers, and more.

In this article, we have listed the 9 best and most popular IoT programming languages in 2022.

There isn’t a developer alive today who doesn’t know about this programming language. Its popularity is a direct result of its usability.

As one of the oldest languages in modern programming, this language is ideal for the development of IoT applications, especially in embedded devices. A good example would be with Arduino’s IoT boards.

It is mostly used for writing low-level codes for programming electronic devices. This is due to its light-weight processing nature and ability to interact with the RAM directly.

If you do not believe that C is the most popular programming language, then you’re probably leaning towards Java to take that spot. Like C, Java is also a popular choice for programming IoT.

A look at Java’s architecture and coding layout will reveal similarities in coding techniques with the likes of Mesa, C++, and C. Java is also an embedded programming language that is not shackled by hardware limitations.

Thanks to the Java Virtual Machine, this language has code debugging capabilities and can transfer the code to a chip. This ability means that this Internet of Things programming language is used in several JVM devices, from servers, computers, and smartphones to the tiniest of devices.

While JavaScript is a scripting language, Python is the official programming language for most web applications. But as the scope of programming has expanded, so has the use of Python. This language has a few things going for it. It is an easy-to-learn language when compared to other languages.

Its versatility, simple syntax, and ability to handle complex codes make it an excellent choice for any IoT programming project. It has already been used in popular IoT systems like Amazon Alexa.

It’s processing power makes it ideal for small to medium-sized IoT development projects in the embedded programming space and beyond.

Another C-inspired language, Swift, was developed specifically for the iOS platform. Developers use Swift for IoT programming using Apple devices as a hub.

With the popularity of Apple devices, Swift is experiencing natural growth and incorporation among the IoT stack of many developers. And Apple is responding to this growth by developing libraries to keep up with Swift’s growth and integration.

This language essentially owns all programs we use to interact with the worldwide web. Not really considered a traditional programming language, this scripting language is what is used for all HTML programs and web apps and browsers.

Although it seems to share Java’s language libraries and borrow elements from languages like C and Python, it is very much its own master. JavaScript is known for its gift of interoperability to devices. Also, its extensive application in modern programming is worthy of recognition.

Today, JavaScript’s offshoot — the more hub and server-focused Node.js — is an excellent choice for gathering and transmitting data from the sensors to the hubs.

Perhaps, the most significant advantage here is that developers who already speak fluent JavaScript will not need to learn a new language before making their foray into IoT programming.

Like Python, PHP is a big deal for many websites and blogs. Some honourable mentions include Google, Facebook, Yahoo, WordPress, and Wikipedia.

PHP’s dedication to handling microservices on the server end makes it an obvious addition in any developer’s IoT programming stack. It is perfect for small devices. Like Java, it can transmit code from a computer to a sensor’s chip.

However, C++ is a complex language, and developers can make a lot of mistakes with it. Still, it remains a favourite among programmers.

C++ shows its strength in Linux projects and the embedded programming space with its ability to abstractions and object layers. C++ also encourages the use of C#, Python, Java, and a lot more languages.

Google got in on the programming language action when they launched Go. This language feels like an advanced iteration of C, and in many ways, it is.

This IoT programming language packs more punch than C in terms of processing power. It also allows the simultaneous transmission of big data between two or more devices across several channels.

For all it promises, Go is still not at its best self, thanks to its high sensitivity to data loss and errors if there is slight mismanagement during coding.

Rust allows for sending and receiving big data between devices without fear of data loss. Rust arguably has the highest processing power among all the languages on this list.

The question about which is the best internet of things programming language depends on many factors. These languages have carved a niche for themselves within the IoT space. But at the end of the day, it is down to the developer’s preferences.

Frank Hamilton has been working as an editor at review service Best Writers Online. He is a professional writing expert in such topics as blogging, digital marketing and self-education. He also loves travelling and speaks Spanish, French, German and English.

I Like python programming language. Nowadays python is most popular. But I don’t get the best resource to learn python. Does anybody help me?

Totally agree with the list.
Also it was so well written! Thanks for sharing this one

Copy Files From One Folder to Another with AOMEI Backupper 6.8.0