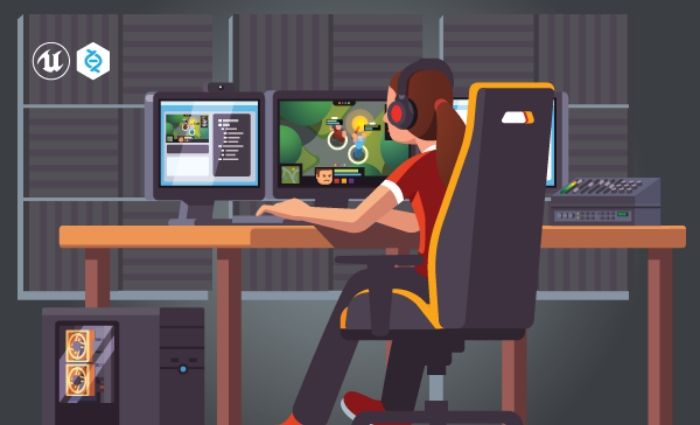 Currently, advanced technologies like Virtual Reality and Augmented Reality are gaining popularity. In recent years a whole new generation of games is witnessed around the corner. Everyone is trying to implement these technologies to remain in the competition.

With Unreal Engine 4 develop successful games using AR, VR, and other technologies. Unreal Engine 4 (UE4) is helping to develop not only Epic Games but also engaging games with advanced features.

UE4 also offers a robust system for add-ons and plugins. Many businesses are getting involved in the game sector to use this UE4 to develop their games. Using UE4 developer can release regular updates to adjust to changes in Unreal engine game development. Moreover, it allows the developers to add new features that could make game development easier.

Virtual Reality (VR) is one of the most exciting technologies in the market. Many companies in various verticals are trying to get into that particular door. Virtual Reality headsets from companies like Oculus, HTC, and Sony are becoming cheaper and more common.

UE4 helps create a powerful game from scratch with an extremely powerful graphics engine. It is already merged with VR functionality. UE4 helps your existing project to convert to VR. Launching VR games is as easy as in VR Preview mode and viewing it in your headset.

Therefore, the gaming sector is inclined towards this amazing game engine. UE4 provides a Motion Controller that can add to your controller to get started quickly. Apart from that with UE4, you can even edit your project in VR Mode. This will allow you to visualize the editor’s view in your VR headset.

In the last few years, Pokemon Go got extremely popular and renowned around the globe. Augmented Reality (AR) is another new technology in the market helping many other gaming companies to try this innovative technology.

For mobile devices, iOS has ARKit to support AR programming whereas Android has ARCore. In the market, many AR headsets are possibly other new ways to view AR content. UE4 for Augmented reality is bridging the gap between the customer and the companies. Augmented reality is bringing real-size 3D designs of products in the true environment.

This positively impacts both supply chain efficiencies on the enterprise side and optimize their sales process. UE4 is leveraging AR to personalize the marketing and sales experience in various sectors. Looking at the present scenario of the current market every platform has its way of handling Augmented Reality right now.

UE4 is efficient in supporting numerous platforms such as PC, Mac, web, Xbox One, Mobile, PS4, and Switch. It probably supports other recent platform getting introduced in the market. As next-gen consoles coming out in 2020, the Unreal engine is already working on support for them.

It is known that for the consoles, you do generally need to be a registered developer to access the tools to develop for those platforms. For more indie games you don’t necessarily have to be working at AAA studio.

The best part is that when you develop a game in UE4 that is publishing for another platform work. Just you have to change the controls and the screen size. Running an AAA 3D title might be too slow in a mobile device without any changes. But due the Unreal engine offer the basic game functionality that can be changed accordingly.

If you’re starting a new game project using Unreal Engine 4, it is the right time. Hire unreal developers to transform your imagination into a realistic gaming experience. This game engine offering primary stage, revenue stream, and ideas for in-experience monetization.

Every sector is coming up with the many AR/VR ideas to explore new opportunities. VR specific solutions are helping new projects to come into new gaming picture. The unreal engine can easily show compatibility with new devices, game types, and methods of programming in the future.