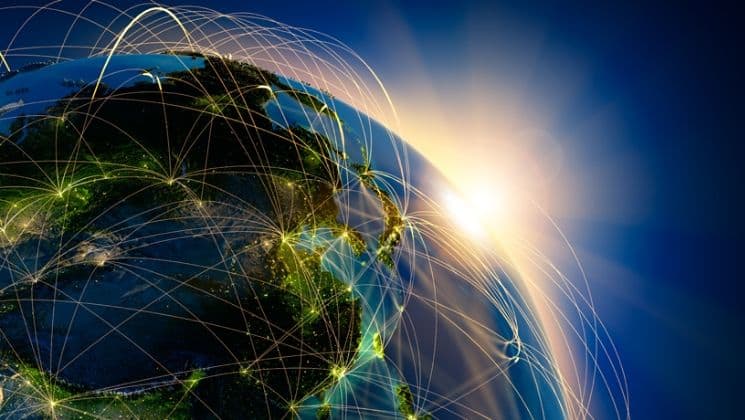 A geographic information system is a set of tools that integrates and relates various components that allow the organization, storage, manipulation, analysis and modelling of large amounts of data from the real world that are linked to a spatial reference.

It facilitates the incorporation of social-cultural, economic and environmental aspects that lead to decision making in a more effective way.

The GIS works as a database with geographic information (alphanumeric data) that is associated with a common identifier to the graphic objects on a digital map.

In this way, by pointing to an object its attributes are known and, conversely, by asking for a database record, its location can be known in the cartography.

The primary reason for using a GIS is spatial information management.

The system allows the information to be separated into different thematic layers and stores them independently, allowing working with them quickly and easily, and facilitating the possibility of relating the existing information through the topology of the objects.

Check out the characteristic features of the best GIS Software below.

Modern GIS technologies work with digital information, for which there are several methods used in creating digital data. The most widely used method is digitization, wherefrom a printed map or with information taken in the field.

It is transferred to a digital medium through the use of a Computer-Aided Design (DAO or CAD) program with georeferencing capabilities.

Real-world objects can be divided into two abstractions: discrete objects (a house) and continuous objects (amount of rain fallen, an elevation). There are two ways to store data in a GIS: raster and vector.

A raster data type is, in essence, any type of digital image represented in meshes. The raster or grid GIS model focuses on the properties of space rather than the precision of location.

Divide the space into regular cells where each one represents a single value. It is a very suitable data model for the representation of continuous variables in space.

In vector data, the interest in representations focuses on the precision of the location of the geographical elements in space and where the phenomena to be represented are discrete, that is, of defined limits.

Each of these geometries are linked to a row in a database that describes its attributes.

Checkout some of the best GIF Software.

A great open-source GIS. We use QGIS all the time and although it still has some bugs it is positioning itself as the reference-free GIS.

QGIS is the best known open source GIS tool with a proven track record and a vibrant community, as well as having its own particular ecosystem of plugins.

QGIS offers a truly open alternative that lowers entry and cost barriers, has no license fees, and runs on the operating system of your choice.

Global leader in open source GIS, GRASS, was developed by the United States Army Construction Engineering Research Laboratories again in the 1980s and is used by a large number of organizations.

The gvSIG Desktop application was the first to be developed within the gvSIG project, so it is also abbreviated as gvSIG.

This project was developed by the local government of the Valencian Community (Generalitat Valenciana) of Spain, with the initial objective of managing the geographic data of that community.

Developed by the Arizona State University Center for Geospatial Geospatial Analysis and GeoDa, GeoDa is a great piece of software for spatial analysis.

SAGA GIS is simple but powerful software, it has a large library for spatial analysis and watershed characterization.

The interpolation options in SAGA GIS are better implemented than in other free and commercial software. Its GIS platform is more oriented to spatial analysis.

Its developers have spent an incredible amount of time building a robust free GIS software package. SAGA GIS has become one of the leading GIS software in the world.

It is accessible through source languages ​​such as C, Python, PHP, TCP, Ruby and Perl, and its objective is to fully comply with the SQL-92 standard, to provide speed and simplicity of the database.

It is a module that adds geographic object support to the PostgreSQL object-relational database, turning it into a spatial database for use in the Geographic Information System.

It is released under the GNU General Public License.

If you need to generate some large maps quickly, TileMill may be your solution. From DevelomentSeed, TileMill offers an open-source platform for building maps, using its distinct CSS style for mapping.

Why Do Students Need a Plagiarism Checker Software?

Why Appy Pie’s Design Studio is a software to watch out for!