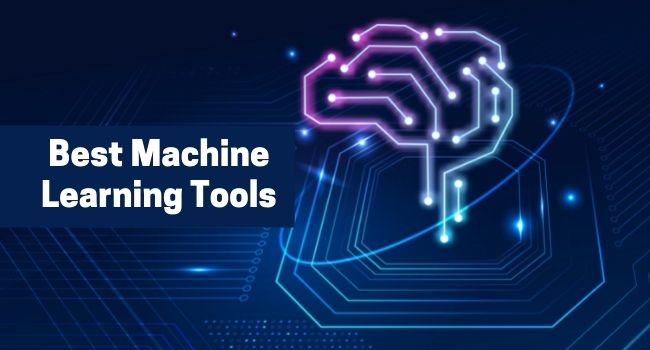 Machine learning is an astonishing technology. It is also a very overwhelming one if you use it in a correct way. How fascinating it would be to build a machine that behaves like a human being to a great extent.

Mastering machine learning tools will let you play with the data, train your models, discover new methods, and create your own algorithms.

So, why not think of starting a career in this exciting field. You don’t need to go to a university and follow an academic curriculum.

Machine learning comes with an extensive collection of ML tools, platforms, and software. Out of many machine learning tools, choose any one of them to gain expertise.

In this article we will list the top 15 best and most popular machine learning tools.

TensorFlow is an open-source framework that comes in handy for large-scale as well as numerical ML.

It is a blender of machine learning as well as neural network models. Moreover, it is also a good friend of Python.

The most prominent feature of TensorFlow is, it runs on CPU and GPU as well. Natural language processing, Image classification are the ones who implement this tool.

Pytorch is a deep learning framework. It is very fast as well as flexible to use. This is because Pytorch has a good command over the GPU.

It is one of the most important tools of machine learning because it is used in the most vital aspects of ML which includes building deep neural networks and tensor calculations.

Pytorch is completely based on Python. Along with this, it is the best alternative to NumPy.

Knime is again an open-source machine learning tool that is based on GUI. The best thing about Knime is, it doesn’t require any knowledge of programming.

One can still avail of the facilities provided by Knime. It is generally used for data relevant purposes. For example, data manipulation, data mining, etc.

Moreover, it processes data by creating different various workflows and then execute them. It comes with repositories that are full of different nodes.

These nodes are then brought into the Knime portal. And finally, a workflow of nodes is created and executed.

Accord.net is a computational machine learning framework. It comes with an image as well as audio packages. Such packages assist in training the models and in creating interactive applications. For example, audition, computer vision, etc.

As .net is present in the name of the tool, the base library of this framework is C# language. Accord libraries are very much useful in testing as well as manipulating audio files.

Scikit-Learn is an open-source machine learning package. It is a unified platform as it is used for multiple purposes. It assists in regression, clustering, classification, dimensionality reduction, and pre-processing.

Scikit-Learn is built on top of the three main Python libraries viz. NumPy, Matplotlib, and SciPy. Along with this, it will also help you with testing as well as training your models.

Along with this, Azure also aims to provide AI facilities to the user. Just like TensorFlow, it also works on CPU and GPU.

Pylearn2 is a machine learning library that is built on top of Theano. Therefore, there are many functions that are similar between them. Along with this, it can perform math calculations.

Pylearn2 is also capable of running on the CPU and GPU as well. Before getting to Pylearn2, you must be familiar with Theano.

RapidMiner is a piece of good news for the non-programmers. It is a data science platform and has a very amazing interface. RapidMiner is platform-independent as it works on cross-platform operating systems.

With the help of this tool, one can use their own data as well as test their own models. Its interface is very user-friendly. You only drag and drop. This is the major reason why it is beneficial for non-programmers as well.

The objective of Google cloud AutoML is to make artificial intelligence accessible to everyone.

What Google Cloud AutoML does is, it provides the models which are pre-trained to the users in order to create various services. For example, text recognition, speech recognition, etc.

Google Cloud AutoML became very much popular among companies. As the companies want to apply artificial intelligence in every sector of the industry but they have been facing difficulties in doing so because there is a lack of skilled AI persons in the market.

Mahout is launched by Apache which is an open-source platform based on Hadoop. It is generally used for machine learning and data mining.

Techniques such as regression, classification, and clustering became possible with Mahout. Along with this, it also makes use of math-based functions such as vectors, etc.

If you haven’t yet started with ML check out Machine Learning Tutorial for Beginners with Case Study!

Jupyter notebook is one of the most widely used machine learning tools among all. It is a very fast processing as well as an efficient platform. Moreover, it supports three languages viz. Julia, R, Python.

Thus, the name of Jupyter is formed by the combination of these three programming languages. Jupyter Notebook allows the user to store and share the live code in the form of notebooks.

One can also access it through a GUI. For example, win python navigator, anaconda navigator, etc.

Like Mahout, MLLIB is also a product of Apache Spark. It is used for regression, feature extraction, classification, filtering, etc. It also often called Spark MLLIB. MLLIB comes with very good speed as well as efficiency.

Orange3 is a data mining software which is the latest version of the Orange software. It assists in pre-processing, data visualization, and other data-related stuff.

One can access Orange3 through the Anaconda Navigator. It is really very helpful in Python programming. Along with this, it can also be a great user interface.

Welcoming the next ML tool, Weka. It is also open-source software. One can access it through a graphical user interface.

The software is very user-friendly. The application of this tool is in research and teaching. Along with this, Weka lets you access other machine learning tools as well. For example, R, Scikit-learn, etc.

IBM Watson is a web interface that is given by IBM for using Watson. Watson is a human interaction Q and A system which is based on Natural Language processing.

Watson is applied in various fields such as automated learning, information extraction, etc.

IBM Watson is generally used for research and testing purposes. Its objective is to offer a human-like experience to the users.

All these tools use different programming languages and run on them. For example, some of them run on Python, some on C++, and some on Java.

Hi,
Nice blog on machine learning tools, good knowledgeable tools. You have covered almost all tools and their uses.