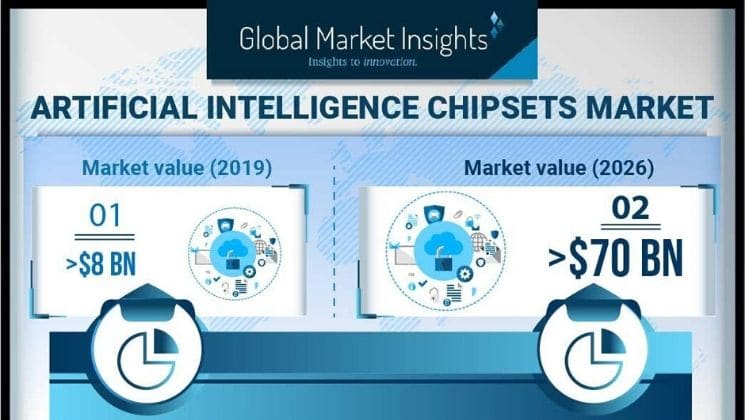 According to a recent study from market research firm Global Market Insights, the artificial intelligence chipsets market is set to grow from its current market value of more than $8 billion to over $70 billion by 2026, gaining remarkable traction over the 2020 to 2026 period.

The Artificial Intelligence chipsets market is poised for robust growth on the back of increasing penetration of e-commerce platforms that generate enormous amounts of data.

The need for high-speed processors has prevailed owing to a surge in vital user information and data. This has led to the requirement of AI chipsets across various industries. A rise in the number of smartphone users has also stimulated AI chipsets.

Increasing demand for smarter robots, which include control of connected devices and virtual assistants, has significantly accelerated the demand for AI-based operations.

The Field Programmable Gate Array segment in the artificial intelligence chipsets market is estimated to register a CAGR of nearly 25% through 2026 due to high-performance, low-power requirements and enhanced connectivity features.

On the regional front, Europe’s artificial intelligence chipsets market is expected to record lucrative proceeds, with surging development made in self-driving vehicles.

Automakers are developing cutting-edge autonomous vehicles by using AI chipsets to process large amounts of data from cameras and sensors in real-time to facilitate efficient operations.

Integration of AI chipsets in self-driven vehicles can gather large amounts of data from sensors, cameras, and other sources in real-time, that aids the vehicles to function more safely and efficiently.

Europe’s artificial intelligence chipsets market is expected to witness a growth rate of over 33% over the projected timeframe owing to the rapid development of autonomous vehicles in the region.

Why did the Microsoft Teams app crash? Expert insights